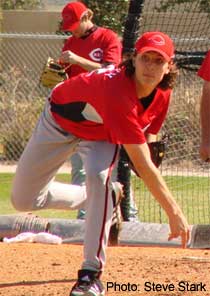 John Sickels wrote a piece for Yahoo Sports on the Top 4 RHP prospects in baseball. He listed Cueto and Bailey as three and four behind Boston pitcher Clay Buchholz and Yankee reliever/starter Joba Chamberlain. Here is what he had to say on our guys:

Stuff: While Cueto isn’t tall, there is nothing short about his stuff. His fastball is consistently at 92-94 MPH, and hits 96 at times. His slider and changeup are both above-average offerings, and his control is excellent. His mechanics are consistent and simple, which should help him stay durable in the long run despite his lack of big size.

Projection: Cueto’s combination of power, precision, and confidence gives him projection as a borderline number one or a number two starter at the major league level. I’m not quite as confident about him as I am about Buccholz and Chamberlain, but I really love what he did last year, and the lack of height doesn’t bother me.

Stuff: Bailey has an impressive 93-96 MPH fastball, and at times his curveball is even better than the heater. His changeup remains a work-in-progress, and is definitely his weakest offering. Bailey’s command comes and goes at times, but when everything is working he dominates the game. He was hampered by a groin injury during his major league trial last summer, which likely impacted his performance.

Projection: Stuff-wise, Bailey projects as a number one starter. He needs to improve the changeup and his overall command.

The Cueto/Bailey decision was the tough one. Their fastballs are very close, with Bailey having a tad more consistent velocity, but with Cueto showing better control. Bailey’s curveball is special, but Cueto’s slider is solid and his changeup is much better than Bailey’s. Cueto also has better command, but at least part of Bailey’s problem last year was related to the groin injury. Bailey is bigger and fits the traditional physical profile of a mound ace better than Cueto, giving him more projectability. Cueto put up better numbers last year and is just three months older than Bailey, but Bailey was at a higher level of competition.

Ultimately I ranked Cueto ahead of Bailey because of the command issue, but it was close. The bottom line is that the Reds have two young pitchers who could be number one guys if they stay healthy.

I can see the argument that Sickels makes about Cueto over Bailey…. but I just don’t put as much faith into it. Mainly because he suggests that Bailey and Cueto have similar fastballs. Bailey is consistantly 2-3 MPH faster than Cueto is across the board. Add in the fact that Bailey has a much closer to the plate release point due to his size advantage and his fastball that is already faster, is not traveling as many feet once it leaves his hand either. Still, in the end its just a small little footnote to the fact that the Reds have two of the top four right handed starting pitching prospects in baseball.

Keith Law, who I rarely agree with on anything, had this to say in his in one of todays chats:

Dave (Cincinnati): If you are running the Reds, do you trade Bailey and two mid-level prospects to the A’s for Blanton?

Keith Law: (1:14 PM ET ) No. Bailey and Bruce have to be off the table, and I’d probably hold Cueto, too. I am not a big Blanton fan – putting him in front of a meh defense in a small park is asking for trouble.

The fact that I agree with Law on this makes me question myself, but then I figure in his case, everyone lucks into being right sometimes.