It wasn’t more than two weeks ago that I reported that Hunter Greene had hit 104 MPH multiple times in an outing he had in Goodyear during spring training. Well, in his last outing the Cincinnati Reds top prospect did one better. The right-handed starter hit 105 MPH with his fastball. Pitch velocity data only goes back so far, and as far as searchable data, it only goes back to 2007. As noted in the previous article, only two pitchers have ever hit 104 MPH twice in the Major Leagues – Aroldis Chapman and Jordan Hicks. They are also the only two pitchers to ever reach 105 MPH. We don’t have that kind of searchable data for minor league players, but no matter how you slice it – Hunter Greene is doing things that almost no other human being alive has ever done.

When I first heard about this from a contact, I reached out to some more people who are in Arizona to try and verify the information. Someone I spoke with said that they had heard the same information about 105 MPH. That was good news. But what they shared next was perhaps even better news.

The person said that Hunter Greene’s slider, when it has been on, is an elite pitch at the big league level. Now, the wording he used did suggest that it’s not always “on” at that level, but when you imagine a young pitcher who hasn’t had nearly as much developmental time as many his age, and couple that with his extreme athleticism and ability to also throw laserbeams at 105 MPH to the catcher, well it doesn’t take much imagination to think about how good he could be with continued development.

Sunday was the first day of workouts in Goodyear for players in minor league camp who were not a part of “early minor league camp”. Last year’s 1st round draft pick for the Reds didn’t waste time leaving an impression. One person I spoke to said that he “hit a few balls into Goodyear airfield”. If you’ve never been to the spring training complex in Goodyear, I’ll share a google image below to illustrate the point that Hendrick was hitting baseballs a very, very long way (though not quite to the actual airfield which is about 800 feet to the security fence from the closest home plate from the complex). 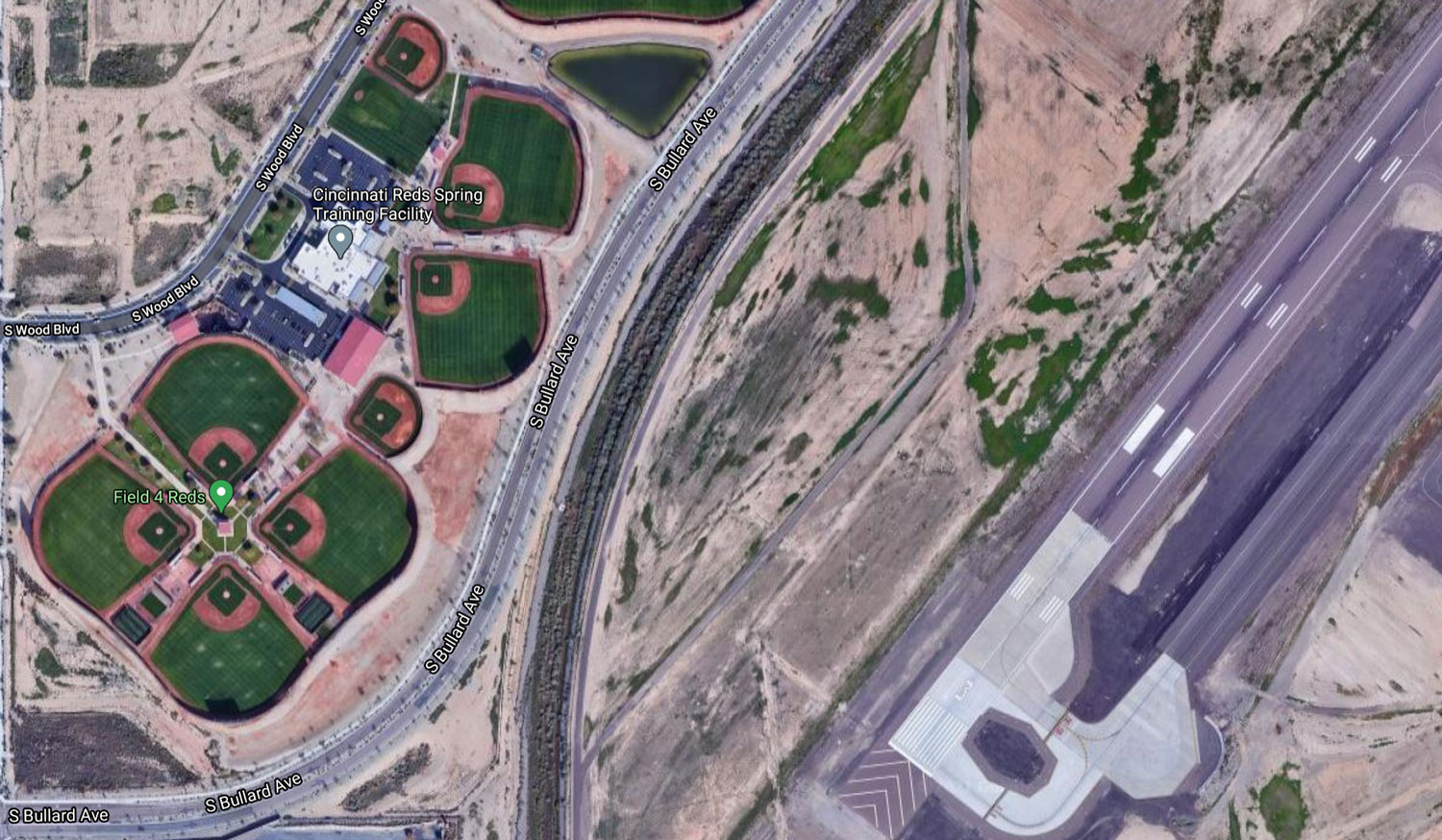 The report on Hunter Greene reaching 105 MPH was first published for those who support the site at Patreon. You can show your support by signing up at Patreon.com/RedsMinorLeagues where you get access to some content early, and once the season begins you will get daily game recap, information, and top prospect rundowns in your inbox every morning.