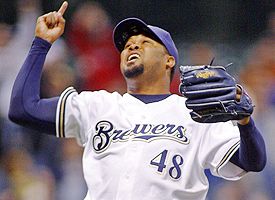 This isn’t exactly minor league related, but I thought it was a good enough topic to discuss here and it does involve minor leaguers who will contribute to the Reds this year.

Well I wanted to look at the 2007 Reds versus the 2008 Reds in the hopes of trying to figure out what we need to do to improve this sad sack of a team that was the 2007 Reds.

So, for the Reds to get to that 81-81 record, they need to make up 70 runs from last years RS/RA. Lets assume that Harang and Arroyo and Belisle all stay the EXACT same. No improvements at all. That gives the Reds 620 innings and 320 runs allowed (4.64 Runs Against per 9, not ERA). The rest of the rotation (Lohse and then the patchwork) gave the Reds 337 innings and 234 runs allowed (6.25 RA/9). Most of those guys are now gone and the Reds need to replace those 337 innings. That leaves a group of Bailey, Volquez, Maloney, Cueto and Affeldt. Lets just go ahead and run the numbers here and say that group pitches 337 innings and go with some bench mark RA/9.

Now with those numbers, lets figure out where that group of starters should roughly fall…. Lets go out on a limb and go with a median number of 5.37 RA/9. Thats not really out of the question is it given the talent?

Now lets just go out and say Cordero (photo above: AP/Darren Hauck) gives us 70 innings and 29 runs (3.73 RA/9) and combined that with the 140 innings from Weathers and Burton and their 61 runs….

OK, now does anyone honestly believe the pen will be nearly as bad as last year?

The bullpen saved 53 runs and the rotation saved 37 runs, which gives the Reds a 90 run turnaround and in turn is looking at ~ and 83-79 record.

What happens if Matt Belisle improves just a little bit and say gives the Reds 178 innings and a 4.60 ERA this year? That would itself save the Reds 15 runs overall and push them close to an 85-77 record.

Is anything at all I typed really something that we shouldn’t expect to happen based on what we have currently?

I don’t really think it is. All of that itself was done just by getting rid of guys like Milton, Saarloos, Santos, Ramirez, Dumatrait and adding guys like Cordero, Affeldt, Volquez and getting contributions from Bailey, Cueto and Maloney as well. I didn’t even address the offense which may or may not improve, but lets just assume it stays the same we still aren’t in that bad of shape and the core guys are all here for at least 3 more years we can control if we want Harang, Arroyo, Belisle, Bailey, Cueto, Volquez, Cordero, Burton, Votto, Phillips, Encarnacion and Bruce. Thats a pretty solid core of guys right there that we should be building around IMO.