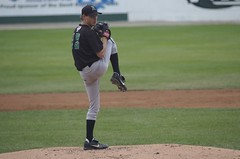 Reason to watch –  Coming into 2007, Wood was one of the Reds top ranked prospects after having a successful season in Dayton. He however ran into arm problems during the season and was shut down. He is back and pitching well this spring. If Wood can pitch to his potential, he will be one more reason that the Reds can claim to have lots of depth in one of the better systems in all of baseball.

Reason to watch – Frazier was taken in last years supplemental first round and came onto the scene just hitting like we expected in Billings. He brings an advanced approach to the plate and should be able to handle the jump from Billings to Sarasota just fine. He won’t likely stick at SS, but will play there for now.

Reason to watch – Last years 3rd round pick was taken care of with kid gloves last year after being drafted. He only pitched 15 innings in Billings. He will be 23 years old this season but has quality stuff and it will be his first real test of pro ball.

Reason to watch – Francisco has plenty of power at the plate and he plays a solid 3B, but there are some questions about his plate discipline and his strikeouts. If he doesn’t get his walk rate up some and try to cut down on his strikeouts, his development will be slowed. Sarasota is a big step for him, lets hope his aggressiveness has calmed a little bit and hopefully it will lead to a big season.

Yesterday I covered the Dayton Dragons and tomorrow I will cover the Chattanooga Lookouts.