The Enquirer ran a whole bunch of short articles on prospects so there is a lot of articles, but not a lot to most of them.

John Fay wrote one on the Young Arms. He touches on the recent history of the Reds pitching prospects.

John also wrote about the 4 young third basemen in the system. He has a few notes on Todd Frazier, Juan Francisco, Adam Rosales and Brandon Waring. Terry Reynolds provides the small blurbs on each player.

John Fay also has an article about stockpiling young talent in the system.  Terry Reynolds has one of my favorite sayings about the draft in this article.

“You try to pick out who you think has the highest ceiling based on the tools. When you try to draft for need, you get in trouble.”

Jeff Brantley wrote ‘scouting reports’ on Cueto, Volquez and Bailey. He actaully has scouting reports on Cueto (Photo: Tim Evearitt/The Chattanoogan) and Volquez but like I have noticed, he seems to have something against Homer Bailey. For the other two, he lists pitches they throw and how they throw them. For Bailey he doesn’t list any pitches, talks about his fastball, dogs his curveball for not being a short breaking one (despite the fact that he has gotten plenty of good hitters swinging and missing or standing there looking at it all spring) and doesn’t mention his changeup that has looked promising this spring or his slider or cutter that he has been working on this spring.

Shannon Russell wrote an article on the Young Bats in the system. It talks about batting average way too much as a way to determine a good hitter for my liking but talks about the impact Votto and Bruce could have on the team.

David Paschall of the Chattanooga Times Free Press has an article up on Drew Stubbs(Photo: MWLGuide.com). Here are some of the highlights from the article: 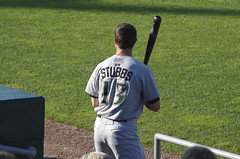 “I’ve had a pretty good spring, and if I can keep up the things I’ve been doing and build off that, I think I’ll be there before too long,” Stubbs said. “Being consistent in all phases of the game is the main thing. Rather than being great a few days of the week, I need to be good every day. That’s my goal.”

“I’ve played a couple of intrasquad games against him, and he looked pretty good,” new Lookouts manager Mike Goff said. “He’s very talented physically, and he’s a guy I’m hoping before the year is over that we’ll see in Chattanooga.”