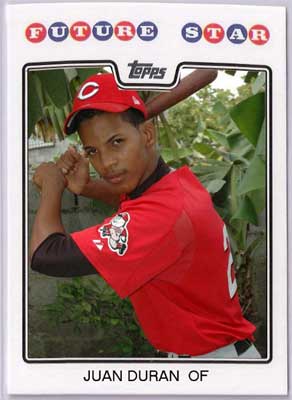 Juan Duran could play this year

Ben Badler at Baseball America says that Juan Duran (Photo creating by reader Tom) could spend some time in the GCL this year, but right now is dealing with an elbow injury. The GCL uses a DH, so getting at bats shouldn’t be a problem.

Peek at the Draft

Jim Callis, also of Baseball America does a brief little rundown of who/why the Reds should draft in June. He eventually comes to the point where he thinks they end up with a right handed pitcher at #7.

Opening Week of the Minors

The opening week is now over after 4 games for the teams. All of the teams are 2-2 except Dayton who fell to 1-3 in the opening week. There were some guys who had real good weeks. Drew Stubbs (who I plan on writing something on this week) leads the FSL in walks after 1 week. Juan Francisco has a nice even 1.000 OPS. Tom Shearn and Tyler Pelland took a no hitter into the final inning of a double header before Ricky Stone allowed a hit. Todd Frazier has a 6-1 walk to strikeout ratio and is boasting a 1.316 OPS.  BJ Szymanski has absolutely killed the ball so far this year with a double, triple and 2 HR in just 12 at bats. Daryl Thompson made a strong debut for Chattanooga with 6 innings and 5 strikeouts.  Jerry Hairston and Jolbert Cabrera have killed the ball down in Louisville as both have OPS’s over 1.100. Homer Bailey walked just 1 batter in 7 innings in the season opener and threw just 83 pitches.