Still chugging along today we are going to look at the Top Prospects in the 11-20 range. Yesterday we hit the guys in the 21-30 range and on Monday covered the guys in the 31-40 group. 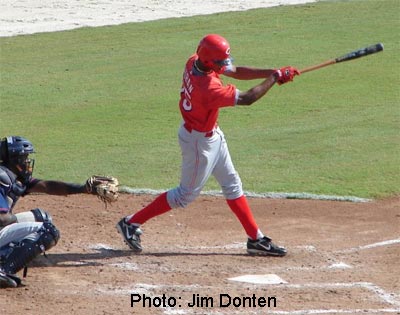 was rated by most as the #2 prospect on the international scene coming into this season and the Reds were the only team to notice that he was eligible to be signed before the July 2nd start date. They ponied up 2 million dollars to get the teenager who is said to have plus plus raw power and a very strong arm. He is currently in Sarasota participating in Fall Instructional League. My best guess would be that he starts next year in the GCL.

Thompson really burst back onto the scene this year as he regained his pre-arm injury velocity and then a little bit more. He was back to working in the low 90’s but capable of reaching back for a little more while mixing in his curve, change and slider at times. He posted an ERA of 2.19 between AA and AAA before getting a cup of coffee in the majors before having a slight injury. He should be in the running for the #5 spot in Cincinnati next year, although I think he would make a fantastic set up man out of the bullpen.

Carlos Fisher had an outstanding transition to the bullpen this year after starting the first few years as a pro. The ground ball machine (60% ground ball rate) struck out over 22% of the batters he faced thanks to a sinker in the 90-95 MPH range. He has the makings of a very good bullpen guy that could help late in games. It wouldn’t surprise me if he broke in the season with the Reds, but I expect him to spend time in Louisville early on.

Roenicke was pretty dominating in the minor leagues this year as he posted 2.79 ERA between AA and AAA. He sits comfortably in the 94-96 MPH range with his fastball, although he relies on it a little too much. Like Fisher, I would not be surprised to see him break camp with the Reds as a hard throwing bullpen arm.

After making some adjustments with his bat last year, Cozart came into his own this year and showed some solid power as well as a good ability to hit for average. His best asset is his defense though, as its top of the line at a position up the middle. I would expect him to be in Sarasota next year. 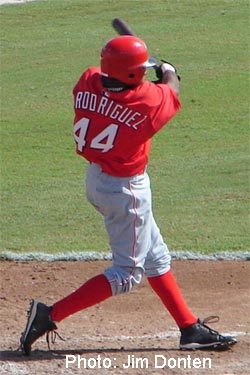 Rodriguez (pictured right – Photo by Jim Donten) was rated as the #3 international prospect and the Reds went out and paid him 2.5 million dollars to become a Red. He has been compared to Eric Davis and a RH version of Carlos Beltran. He has plus plus speed and very good defense. There are some questions about his bat from some though. He may start in the GCL, but it wouldn’t surprise me if he played in the DSL next year.

Ramirez split his time in the bullpen and the rotation last year. He features a fastball that sits 88-91 but can go higher at times and a plus change up. He should be in contention for the #5 starter spot out of spring training, so he may start in Cincinnati or in Louisville.

Dickerson has always had a full toolbox, but this was the first year he really showed them all off. He posted an .864 OPS in Louisville this year before getting a call to Cincinnati where he hit .304/.405/.608 in 121 plate appearances while playing good defense. He was playing over his head in Cincinnati, but its not out of the question to think he can’t be an average major league centerfielder for the next few years, especially if he is protected from tough lefties. Look for him in Cincinnati next year.

Rosales came up as a shortstop, but he is more suited for the other 3 infield positions. He has a strong arm and a solid glove on the defensive side of things. At the plate he can hit for average and has some pop in his bat. He could be a very valuable super sub type of player at the very least.

Hanigan is the oldest guy on the list, but he also plays the most important defensive position in the game and he is pretty good at it. His bat is solid in that he can hit for a decent average and he knows how to work the count very well and puts the ball in play often. He won’t hit for much power, but at the catchers position you can’t ask for much at the plate if the guy is a good defender and will also hit for average and get on base well. I think he will be the starting catcher on the Reds next year.