As of today, all players should be in Arizona for spring training on both the position and pitching side of things. The Reds are coming off of an outstanding year that ended poorly and most of that team is returning. Due to that, there probably are only a few jobs up for grabs and it is probably not even open for any current minor leaguers to even take a single one that is open. Still, the small amount of playing time that they do get could lead to Dusty Baker or Bryan Price asking Walt Jocketty about them if a situation does arise later down the road when someone is needed.

Here is a breakdown of the minor leaguers who are in big league spring training:

Pitchers are generally more fickle than hitters and you tend to go through more of them throughout a year due to injuries and sometimes a lack of performance. So the odds are, if we are going to see some guys called up this year, that is the group we are likely to see the most from. Let’s also note that my odds of seeing a player this year is before September, when some guys may get a call up but not really see much action.

Nick Christiani (RHRP): While he is down the depth chart a little bit in terms of stuff compared to some other relievers, he is coming off of a season with an ERA of 3.34 in AAA. His peripherals weren’t good though, with just a few more strikeouts than walks and a high WHIP. He does get a lot of groundballs. If he wants to stay fresh in the minds of Price and Baker when they need to call someone up, he will need to miss some bats, limit his walks and keep the ball on the ground during the spring.  Odds of seeing him this season: Slim 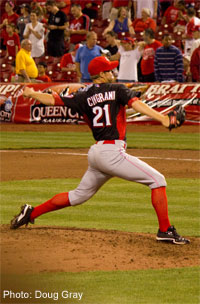 Tony Cingrani could be among the first pitchers called up in 2013.

Tony Cingrani (LHSP): Cingrani saw a small amount of time to end 2012 with the Reds. The Reds have already stated that he would work as a starter this spring. That means that he isn’t making the team out of spring training and will head to Louisville. But if a starter goes down, he could be the guy who gets the call. If a situation arises where they need a lefty out of the bullpen, he could also get that call. He needs to show an improved slider to be looked at as a starter. Odds of seeing him this season: Very good.

Carlos Contreras (RHRP): Contreras spent 85% of his 2012 season in Low-A Dayton before a late call to High-A Bakersfield, so it may seem like a stretch to talk about him as seeing time in the Majors in 2013, but he will be given a chance to make the Double-A team out of spring training and is already on the 40-man roster. He has very good stuff and his numbers were strong last year. For him to garner interest in the spring from the big league guys though, he will need to show that he is mature enough to handle the pressure of the hitters given his limited experience against more advanced competition. Odds of seeing him this season: Below average.

Daniel Corcino (RHSP): Corcino is right there with Cingrani as the guy who will be looked at if the Reds need a starter at some point during the season. There is a chance, particularly later in the year, that he may get a look as a reliever if the situation shows up and none of the relief prospects are standing out. He will need to show better control than he did last season if he wants to stay fresh on the mind of the decision makers, especially earlier in the year. Odds of seeing him this season: Good.

Wilkin De La Rosa (LHRP): The big advantage that De La Rosa has over a lot of these guys is that he is a pure lefty reliever. While the Reds brought in a few veteran types to compete as lefty relievers. On a purely even talent level, he would find himself down the depth chart perhaps too far to see action this year, but his being a lefty gives him a chance. To keep his name fresh as the season goes along, being able to overmatch lefties in the spring is a must. Odds of seeing him this season: Below average.

Justin Freeman (RHRP): Freeman is coming off of a strong 2012 season with Pensacola with a 2.91 ERA. His control is likely his biggest asset and his stuff, while solid enough to pitch in the Majors, isn’t going to wow anyone either. If he plans to keep his name in the heads of the right people, he will need to continue to pound the strikezone, miss bats and show that he really belongs. Odds of seeing him this season: Below average.

Ismael Guillon (LHSP): I will keep this rather short. There is almost no way that Guillon makes it to the Majors this year. He will begin his season in Dayton. Odds of seeing him this season: Very slim.

Drew Hayes (RHRP): Hayes has quality stuff with his fastball and slider, but has been riddled with control issues in his career. The stuff will play, but if he wants to remain in contention to get called up after the season begins he will need to throw strikes and lots of them during the spring. Continuing to miss bats and get groundballs with the big club will also help keep his name fresh on the minds of those discussing who to bring up. His not being on the 40-man roster could keep him back. Odds of seeing him this season: Below average.

Kyle Lotzkar remains a wild card because of his inability to stay healthy.

Kyle Lotzkar (RHP): Lotzkar will likely be used again as a starter, but more and more people are starting to talk about him as a reliever. When he is healthy, he has very good stuff. He has struggled to stay healthy for his entire career though, so a move to the bullpen could help out. Limiting walks will be a key for Lotzkar if he gets a chance to show off his stuff this spring. The stuff is there, so his control in limited action this spring could be the make or break thing for him if the situation arises where a righty is needed. Odds of seeing him this season: If healthy, 50-50.

Curtis Partch (RHRP): Partch made the move to the bullpen in 2012 after a terrible start to the year as a starter. He was dominant at times flashing a plus fastball along with his offspeed stuff. Consistency with his offspeed stuff has been an issue, but if he can show some consistency with it during the spring he could be among the first guys talked about if a bullpen need shows up. Odds of seeing him this season: Good.

Josh Ravin (RHRP): The hardest thrower in the organization outside of Aroldis Chapman, Ravin has topped out at 101 MPH from the bullpen. He mixes in several other pitches as well, though his curveball is his go to pitch. Control has been the biggest drawback for Ravin in the past, though it was almost exclusively as a starter. He struggled with it as a reliever in the regular season, but showed solid control in the Arizona Fall League out of the bullpen. His pure arm strength will keep his name on the minds of Bakers, Price and others, but if he wants to really be given a true look, keeping the walk rate to a reasonable rate will be key. If he does this spring what he did in Arizona (13 strikeouts and 2 walks), he could be the first guy brought up. Odds of seeing him this season: 50-50 depending on the control and how it develops.

Chad Rogers (RHP): Rogers worked as a starter in 2012 for the first time and had plenty of success. Still, he is viewed more as a reliever by most than a starter. He has the stuff to work as a starter at the back end of a rotation, but could probably be an impact 7th inning type of reliever. As a guy who will work as a starter in 2013, he has a hill to climb to jump ahead of some guys. Pounding the zone, getting ground balls like he usually does and strong performances when he does get into games may give him a chance to be seen later in the year. Odds of seeing him this season: Below average.

Pedro Villarreal (RHP): Villarreal may work in either role in the minor leagues, but is much more likely to be a big league reliever. Out of the bullpen he has plenty of stuff to get the job done. He will be fighting for a spot to be called up against guys who likely have better stuff, but aren’t likely as polished. In the spring if he wants to stand out from the crowd and get noticed, he will need to show strong control and show good results when he is given the chance to pitch. Odds of seeing him this season: Good.

The Reds don’t have a ton of spots open and I don’t see anyone with prospect eligibility remaining taking one of the bullpen spots that may be up for grabs with as many as nine veterans vying for six or seven spots as it is. Beyond one of the deeper bullpens in baseball is still plenty of intriguing arms to keep an eye on. Whether some of the fireballers can take another step forward to force their way in (Ravin/Partch), or one of the more polished pitchers puts together something real strong in Louisville and brings his game up when needed (Freeman,Villarreal) or someone makes a little correction that takes them to a new level, there is plenty of intrigue from the minor leaguers who are in big league camp. None will probably head north with the team, but all have something that they could do to leave DustyBaker, Bryan Price and Walt Jocketty thinking about them when the time comes for someone to get the call once the season gets rolling.

You can see the Position Players Edition here.