All players should be in camp at this point. Earlier this week I looked at the pitching side of things, which is a lot more interesting than the position player side of things where there aren’t really any jobs open for the taking as the Reds are only replacing two players from the division winning team from 2012. Shin-Soo Choo will take over in the outfield, whether or not he winds up in center or right the three outfielders will be Choo, Bruce and Ludwick. At third base, taking over for Scott Rolen will be Todd Frazier. Everyone else should be, assuming health, playing exactly where they were last season for the big league squad. Still, there will likely be injuries that take place during the season and the Reds will need to call guys up. So what these guys do in spring training could be what determines if they are even in the discussion when a situation arises and Dusty Baker and Walt Jocketty need to discuss who to bring up. A strong impression in spring could stick with Dusty, who doesn’t follow along the minor leagues as closely as Walt does.

Here is a breakdown of the minor leaguers who are in big league spring training:

Position players don’t have injuries as often as pitchers do and it is easier to bring up a “veteran type” of player to fill in on the bench if someone does go down rather than call up a real prospect. Still, there could be some guys on the list who will see time in the Majors, but some guys have next to no chance to see time in the big leagues this year. Let’s also note that my odds of seeing a player this year is before September, when some guys may get a call up but not really see much action. 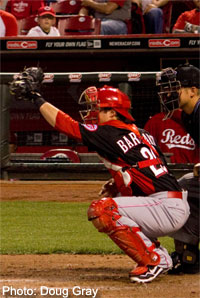 Tucker Barnhart (Catcher): Tucker Barnhart is one of those players who probably doesn’t have much of a chance to see time in the big leagues this year. Despite the fact that he will start the season in Double-A Pensacola, he isn’t on the 40-man roster and is behind the likes of Hanigan, Mesoraco, Miller and Olivo. The Reds don’t add guys to the roster before they need to and there would need to be some real attrition at the catcher spot to reach Barnhart. Still, showing a good handling of the pitching staff will help keep his name in the mind of a guy like Dusty Bakers who may use him from time to time during the spring to help get him extra work with the big league pitchers that will be valuable in the future. Odds of seeing him this season: Slim.

Billy Hamilton (Outfield): Among the minor leaguers, Billy Hamilton is easily the guy that will draw the most attention. His speed alone will draw attention, and as the top prospect in the organization, Dusty and Walt are clearly aware of the things he can do. Showing off good defense in center could become a big thing if the Reds options in center aren’t working as they had hoped and with it being a new position for Hamilton, it could be something to really watch for. How he handles the bat will be a lesser issue than the defense, but if he can show that he can handle the big league pitchers it can’t hurt. With the Reds outfield situation being what it is, and Hamilton not being on the 40-man roster, I would be slightly surprised to see him before September. Odds of seeing him this season: 50-50.

Ryan LaMarre (Outfield): Ryan LaMarre is a strong defender in center and that could be something that the Reds need at some point during the season. However he will also be behind Billy Hamilton and also isn’t on the 40-man roster so his chances will be awfully limited. While his chances aren’t good, showing off his strengths of good defense and strong base running could keep his name in Dusty’s head if there is a need further down the road. Odds of seeing him this season: Slim.

Donald Lutz (First Base/Outfield): With Joey Votto locked in for what will likely be the rest of his career, Lutz will benefit greatly from becoming a stronger defender in left field, where he is below-average right now. He has the speed and the arm to play left field, he just needs more time to better his reads and route running. Lutz can show off real big time power at times, so running into a few during the spring could put his name in the running if there is a need for a short time fill in on the bench. Odds of seeing him this season: Below average.

Kristopher Negron (Infield/Outfield): Negron provides something that no one else really does on this list: position flexibility. While a few guys can play multiple positions, Negron has experience up the middle in both the infield and the outfield. He has some speed as well. His bat remains a question, but as far as a bench guy goes, he could be a managers dream when it comes to one guy filling multiple roles. While he isn’t on the 40-man roster, he fills so many roles that he could get the call at some point. Odds of seeing him this season: 50-50.

Denis Phipps (Outfield): Phipps has had a cup of coffee already in his career, but he is coming off of a brutal 2012 season. He is a good defender and he has a little bit of pop in his bat, but he is an aggressive hitter who strikes out quite a bit. No longer on the 40-man roster, he may be held back due to his roster position, but he also leaves open the option that he probably wouldn’t be picked up if waived when sent back down and he does profile as a good extra outfielder off of the bench if you need one. Odds of seeing him this season: 50-50.

Derrick Robinson (Outfield): Robinson has never played with the Reds as a minor league free agent signing this offseason. Robinson is a speedster who has stolen 314 bases in his minor league career who has above-average range in center. He however is also a hitter without any power as a career .324 slugging percentage would suggest. Like Phipps, he isn’t on the 40-man roster which could actually play in his favor as a guy who likely isn’t going to be lost if brought up and then waived to be sent back down. With his defense and his speed, he could fill a need at some point off of the bench during the season. Odds of seeing him this season: Below average. 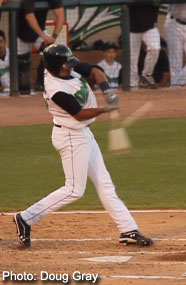 Yorman Rodriguez will look to just gain experience this spring.

Henry Rodriguez (Infield): Rodriguez got his cup of coffee at the end of last season after his first real season where he struggled as he came off a hand injury. Rodriguez provides some infield flexibility as he has experience at second base, third base and shortstop in his career. While he isn’t a guy you would play every day at shortstop, in a pinch he could cover you there. That kind of flexibility

provides a lot of value off of the bench. When given the chance in the spring, showing that he can handle multiple positions defensively will be key for him and of course, hitting well will also help. His being a switch hitter may also give him a little bit of an advantage over some others. Odds of seeing him this season: Good.

Yorman Rodriguez (Outfield): Rodriguez will start the season in A-ball and will play the season at age 20 at a position with plenty of depth in the system. He won’t get a chance to see time in the Majors this year unless he gets a reward call up in September for a very strong 2013 season. Odds of seeing him this season: Slim and none.

Neftali Soto (First Base): The Reds are locked in with Joey Votto, so the options for Soto are incredibly limited. He may be trade bait if he performs well in 2013 for Louisville. But, heaven forbid, if something were to happen to Joey Votto, Soto would likely be the first person to be looked at as a fill in option. His big time power may even be something that could help fill out a need on the bench if the Reds wanted to go that route at some point during the season.  He struggled to hit while playing through injuries in 2012, so showing he is healthy in 2013 spring training and flashing his power could open up opportunities for him later in the season whether an injury occurs or not. Odds of seeing him this season: 50-50.

There likely isn’t a single player on this list who will head north with the Reds unless there is an injury or two that open up a spot on the roster. But several of these guys will find there way to Great American Ballpark before September do help fill out for injuries or to add something to the bench that is needed as the season goes along and the needs of the team are more known.