Yesterday saw Cincinnati Reds 2014 1st round pick Nick Howard take the mound for the Surprise Saguaros in the Arizona Fall League. It was his second start of the season but it was his first at home where the stadium is equipped wit the Pitch F/X camera system that is used to generate all kinds of fun data that includes pitch speed, location, movement, release point, spin rate and a whole lot more.

The start was solid, but unspectacular from a results standpoint as he allowed two runs in 4.0 innings with two hits, two walks, a home run and had a strikeout. Of course the results aren’t really what matters much for Howard as he is working on making the transition back to a starting pitcher after pitching out of the bullpen for the 2014 season at Virginia and for part of the season after being drafted by the Reds.

Let’s take a look at a general pitch breakdown from the start:

Howard was bringing the heat in the game, averaging 95.1 MPH for the game. While he only threw 60 pitches in the game, that average velocity would rank him among the elite starters in baseball as only four starters averaged 95 MPH or better in 2014 and only eight topped 94. He used the fastball often as he threw it 70% of the time. He mixed in a slider, curveball and a change up as well. The curveball was the pitch he used second most and he threw it just 15% of the time.

Velocity is certainly one side to pitching. The harder you throw the sooner a batter has to decide whether to swing or not. It gives pitchers a tiny bit of extra leeway when it comes to location, movement and even the quality for offspeed pitches. Let’s take a look now at the movement of the pitches though as that is also quite important. 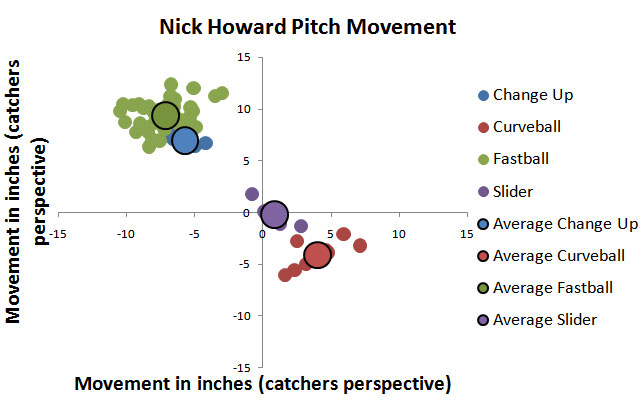 In this chart I’ve included all of the pitches as well as the average movement for each pitch. This is shown from the catchers or hitters perspective. The movement is based on the pitch thrown and how much it moves thanks to the spin on the baseball. Howard is throwing a 4-seam fastball that has solid horizontal movement to it along with some rising action. Two of them even look to have had some cutting action on them. When we look at the change up we see something that is a bit interesting as the change up usually has more horizontal movement to it, but at least on this night that wasn’t the case for the Reds 1st rounder. There are more than a few pitchers that have change ups that have a little more cut to them than their fastball, you just don’t see it as often. The two breaking balls were a bit of a surprise as I didn’t see two of them during the season, only seeing the slider. The curveball was, at least by the movement here, a bit slurvy at times, but also was a true curveball at other times.

It was just one game but it provided some interesting things. First was that he was able to hold his velocity well for at least 60 pitches while showing big time velocity. That was something that he didn’t do as well in college as a starter, at least according to some reports. The second thing was to see a fourth pitch, at least from this data. There is also a chance that they were all sliders, but diving into the data between the sliders and the curveballs the spin rates were pretty different between the two sets of pitches, as was the velocity.

With the home team having the Pitch F/X system in place there will be more posts like this on all of the pitchers. Earlier this week I looked at similar data for Ben Klimesh and Carlos Gonzalez.

Here is some video from late July when Nick Howard was pitching for Dayton.