Over the weekend the Cincinnati Reds played in four games over two days. Both Saturday and Sunday saw the team play split squad games. In two of those games the Reds were pitching in parks with pitch tracking capabilities. While I will be going into more depth later this week with some of these pitchers and the data, for today I just thought it would be fun to create a little graphic showing the average and top velocities for the 12 pitchers, plus Bronson Arroyo*. Ariel Hernandez topped the chart, hitting 100.4 MPH in his game. 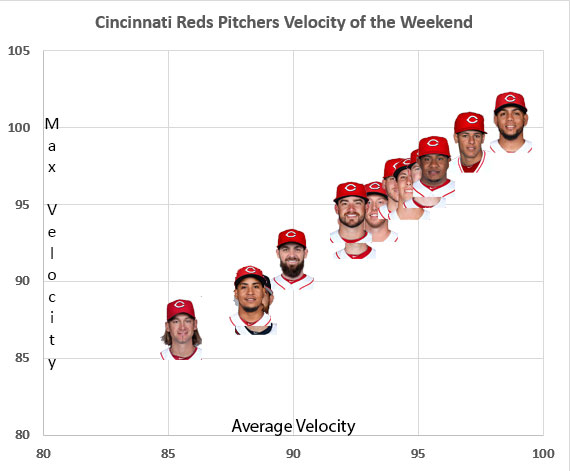 Some of the faces cover up some others, and maybe you don’t recognize everyone, so the data table is listed below. It’s worth noting that everyone on this chart except Bronson Arroyo is placed based on the data that the pitch tracking systems have on them. Arroyo’s placement is based on the report that he was pitching at 84-87 MPH. I simply gave him an 85.5 average and 87.0 average.

Seeing Rookie Davis show another step forward in his top velocity over the weekend was good to see. He topped out at 96 MPH in the start. With the upped velocity and a new slider, we could be seeing a very different Rookie Davis this year. Going back to the top of the list, Ariel Hernandez topped 100 MPH three times in the game. He was throwing his curveball at 88-89 MPH. Think about that for a minute. I’ll wait for you to catch your breath. He’s going to need to improve his control, but that arm…. my goodness.

Here’s the entire chart for all of the pitchers from the two games, with the exception of Deunte Heath. He’s not included as he only had one pitch recorded.