Brandon Dixon had a huge day at the plate for the Louisville Bats on Sunday afternoon. The 25-year-old went back-to-back with Alex Blandino in the 1st inning for his 13th home run of the year. In the second inning he would hit his second home run of the game, a 2-run shot to left field that put the Bats up 5-0. The 4th inning saw Dixon lead off the inning with a third home run, this one to left-center.

In the 7th inning Brandon Dixon came up to the plate with the bases loaded and a chance for a 4th home run, which would set a Louisville Bats record for most home runs in a game. It also would have set the franchise record for RBI in a game. He came up about 4 feet short. Here’s where his double hit off of the left field wall. 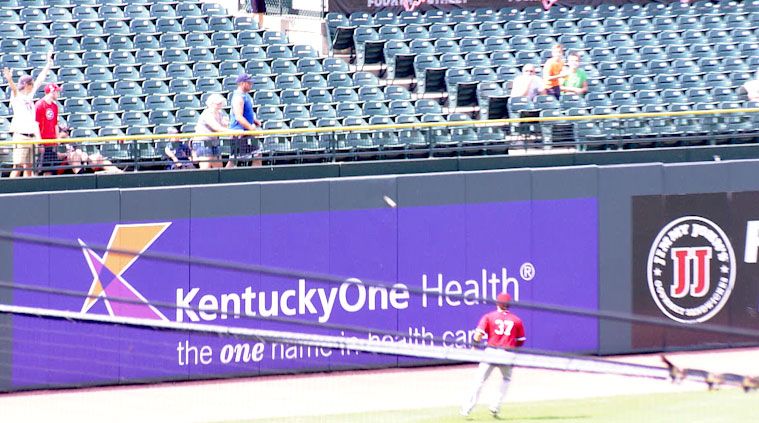 Brandon Dixon had what was probably the best day of his professional career. He finished the day going 4-5 with a double, three home runs and seven RBI. The big day at the plate really boosted his triple-slash line. He’s now hitting .254/.320/.448 with 23 doubles, three triples and 15 home runs. Dixon also has 17 stolen bases on the year.

At the plate there’s certainly things to work on. He’s only hitting .254 and his strikeout-to-walk ratio of 109-to-34 could use some improvement. But he’s got an interesting array of skills that could be useful as a utility player. There’s clearly some power in his game. He’s got some speed, even as a bigger guy.

Defensively, there’s not a position where he stands out on the field. But, he’s solid enough at more than a few. Over the last two seasons he’s spent a good amount of time at third base and second base (his two primary positions over those seasons). He’s also seen action at all three outfield spots as well as first base. He’s basically played everywhere except catcher and shortstop. Time will tell if he gets his chance as a super-utility type of player, but the pieces do seem to be there for Brandon Dixon to fill that role.