For the last year, give or take a few weeks, Minor League Baseball has been in a state of “what will things look like in 2021?!” after it was leaked that Major League Baseball planned to eliminate 42 teams from the minors – mostly from short-season rookie leagues. But it wasn’t only short season teams that were on the initially leaked list that were on the chopping block. Among Cincinnati Reds affiliates, two full-season teams were on the list along with two short-season rookie level teams. We’ve already learned the date of the Greeneville Reds – who no longer exist. The franchise will become a wood bat summer league team for college baseball players.

Earlier this month we got an idea of a strong possibility of what could happen with the Billings Mustangs, too – which sounds very similar to what’s happened in Greeneville and the Appalachian League. We haven’t seen or heard much about the possibilities for the Daytona Tortugas or the Chattanooga Lookouts – both of whom were on the initial contraction list. It is worth noting, though, that the original list of teams up for contraction has reportedly changed since we saw it, but it hasn’t been leaked or reported as to which teams have been added/subtracted from that list.

On Friday afternoon we may have gotten a sign, though, that more teams are starting to learn their final fate. In a now deleted tweet, General Manager of the Boise Hawks Mike Van Hise tweeted this: 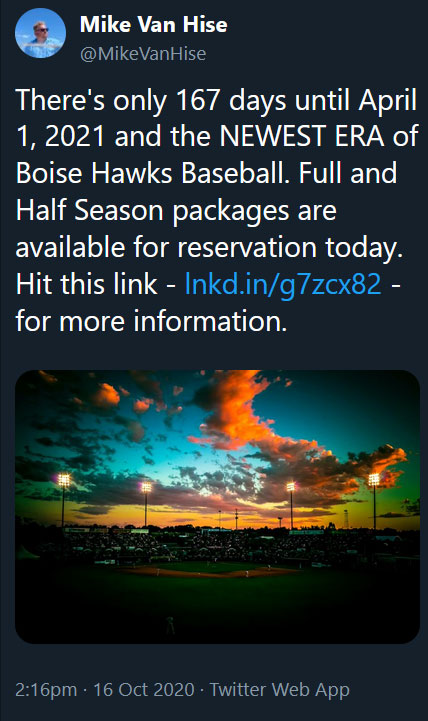 This is rather noteworthy because the Boise Hawks had been a part of a short-season league, playing in the Northwest League as a Colorado Rockies affiliate for the last few seasons. Their season doesn’t begin until after the draft, in mid-to-late June. A season that begins in April would be a full-season team.

For Boise, specifically, it seems like this is a scenario where they know they are not going to be affiliated any longer and there’s a new plan. I could be wrong, but Boise, Idaho doesn’t really fit into any of the leagues that will still exist. They are a 14 hour drive from the furthest California League affiliate. And while you could argue that they could fit into the Pacific Coast League from a geographical standpoint, their 3400 seat stadium doesn’t work for a Triple-A team.

2020 has fried my brain, likely unrepairably. The last time I had seen an update from a team in the league before this, it was from Salem-Kaizer, who was fighting to remain affiliated. That must have still been on my mind, and as a short-season team I assumed that was just a part of the entire league being cut.

As it turns out, they were just one of two teams in the league that were on the initial cut list, while the rest of the Northwest League was expected to become some sort of Low-A league.