I know what you’re thinking: The month isn’t over, dummy! And hey, you are right. There’s still a full series left in May. But the last time that I updated the longest home run list was April 24th and I had meant for it to be up every two weeks. Turns out that I forgot to publish it two weeks ago, so we’re just going to look at the home runs from the last month and hopefully in two weeks I won’t forget to update the list.

I track the distance of the home runs in three ways: The Trackman system at the ballpark, the Hawkeye system at the ballpark, and with the use of video replay and google maps measurement tool. Each system has some limitation to it (and we will get to that below with a good example). Over the past handful of years I’ve been doing this kind of tracking, and generally speaking, the systems are usually within 5-10 feet of each other.

The Longest Home Runs from April 26-May 23rd

This three-run home run from Austin Hendrick was measured at 439 feet, but if you told me it went 1,439 feet, I'd have believed you.

Like the home run from Allan Cerda, this one came on the road and there’s no video to share of it.

Unless my eyes are liars, that baseball went into those trees. Those trees are out of the ballpark and across the street.

The official data from the Trackman system said 427 feet with a launch angle of 33° and an exit velocity of 100 MPH. The box score from that day said the wind was blowing out at 18 MPH. Trackman does not track the baseball the entire way off of the bat. It only goes so far and it uses a mathematical formula based on exit velocity and launch angle. That can cause some issues at times. Without getting into too many details on it, it can be incorrect by 20-30 feet before accounting for the wind.

Putting all of that together, let’s take a look at that home run. 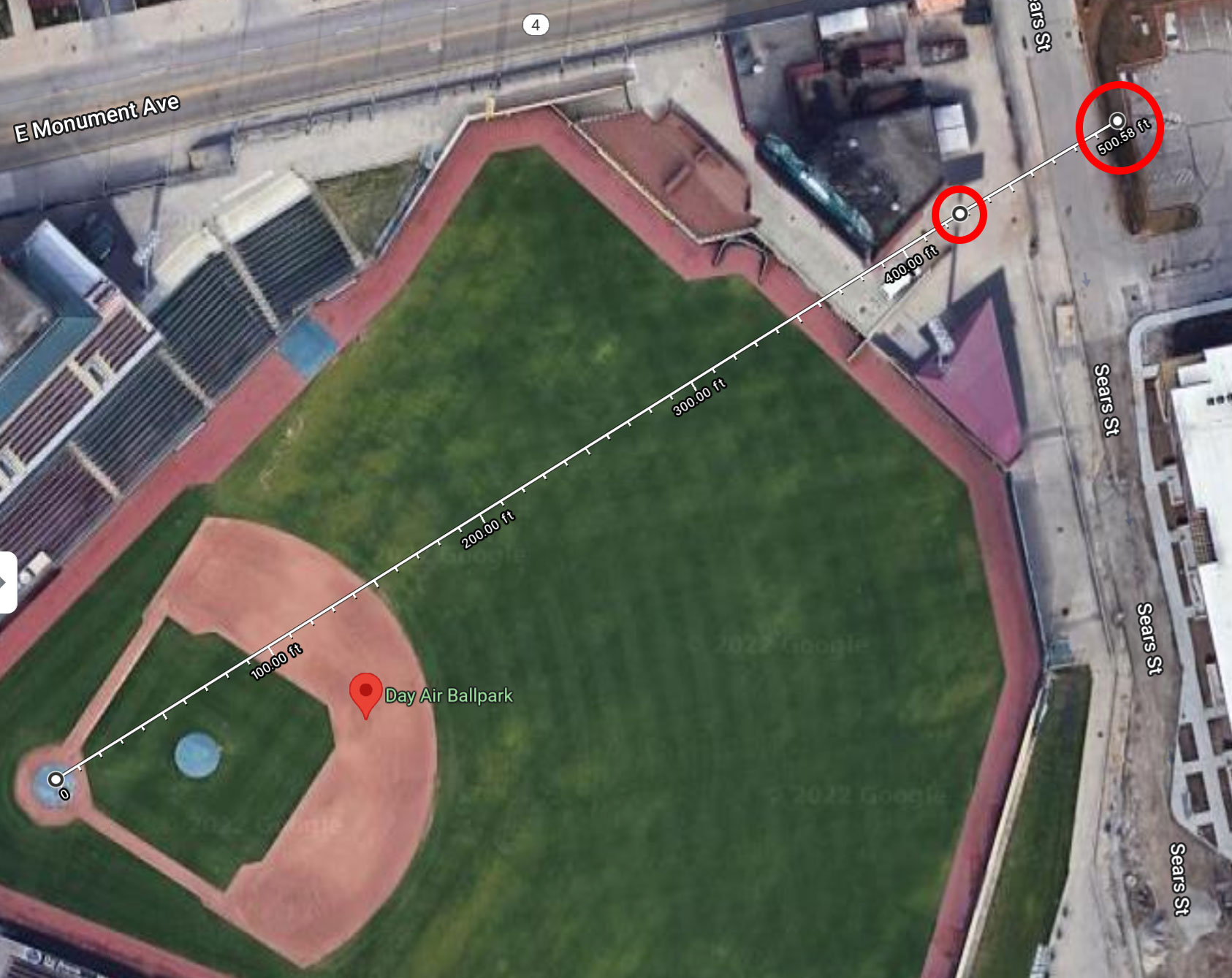 That first red circle is 427 feet from home plate. We can easily tell in the video that it didn’t land there. That second red circle is the tree line where it appears that the baseball landed. Perhaps the video just wasn’t crisp enough and it’s playing tricks on us, but it does seem very clear that the ball landed outside of the stadium. Just to clear the stadium, it’s 465 feet.

Here’s the video again – but this time I’ve slowed it down and drawn some circles where it looks like the ball both goes into the trees and then bounces in the parking lot…..

This is going to be one of those stories that we’ll probably never have a perfect answer for. But from where I’m at – Trackman got this thing wrong. I’m not entirely sure how to do the math to figure out all of the things that would have needed to happen to make the ball go 75-90 feet further than the Trackman projected, but that’s certainly what seems to have happened here unless I’m just completely missing how a baseball would have bounced before I can first see it in the video above, and bounced 75 feet in the air, to only then bounce through the tree and onto that parking lot with enough force to also have itself a very big bounce. It just doesn’t track.

With all of that said, I don’t really know how to handle placing this home run. When the Trackman data is available, I go with it. When it’s not, and I’ve got video, I go with the video and google maps measurement tool. I’ve got both here and they are very, very different.

The Top 25 Homers from the last month

(Editors Note: I am missing data on 15 of the 99 home runs hit in this span – mostly from Chattanooga, where the camera operators don’t track the ball and instead zoom in on the outfielders without anything above the wall showing, missing more than half of the home runs hit in the home ballpark)

Top 10 Home Runs on the Season