Homer Bailey threw live batting practice today and here is what he and John Fay had to say about it:

“I feel good,” Bailey said. “I’m prepared. I think the experience of last year will help.”

Fay also had this on Volquez, Roenicke and Cueto:

Roenicke has the best arm in camp. Volquez is a notch behind. One scout told that Cueto has a chance to be best of them all. “He’s got a great arm and he throws strikes.”

Here is what Dusty Baker had to say about Matt Maloney:

“Not only does he have good breaking stuff, he has deceptively quick late movement on his fastball. He’s not afraid to throw the ball inside to right-handers, which is one of t he toughest things to teach a left-hander to do because they don’t really trust that pitching area because it creeps back over the plate. Most of the left-handers I didn’t like to face were (threw inside to right-handers). If he can throw it inside like that, it means he can peel that plate – peel it like a banana.”

Mark Sheldon has a nice piece up on all of the young pitchers in camp on Reds.com. Below are some of the highlights.

“We have some very good arms out there,” manager Dusty Baker said. “I’m liking what I’m seeing, not only for now but later. We may need somebody during the season. I know our pitching has been much maligned, but I see some rapid improvement from what I’ve heard to what I’ve seen.”

Well, on the bright side of things, Baker does seem to like what we have. Lets just hope he likes it enough to know he needs to protect it (which means no 4 straight 120 pitch outtings for 22 year old pitchers).

“I think any time you do anything a second time, it should be easier,” said Sweet, who managed Bailey in Louisville in 2007. “The first time you experience the big leagues, it’s such a different experience. You’re not quite prepared for it, as much as we try to prepare them for it both mentally and physically. Once you get there, the next year should become easier.”

In the Minors, the 6-foot-4 Bailey could live on his excellent 94- to 98-mph fastball, but at times he was stubborn about using his other pitches. Control was an issue when he was with the Reds, as he walked 28 and struck out 28.

“I think when you’ve had as much success as he’s had, [you think], ‘Why do you need to make any changes or think about making changes?’ ” Sweet said. “One of the reasons Homer is so successful [is] he has so much confidence and belief in what he’s doing. That’s a positive, not a negative.”

This is something I have been saying about Bailey for a long time now and is one of the reasons I think he really needs to be in the big leagues more than others, because he isn’t going to learn as quickly in the minors as he would if he were in the majors.

On Johnny Cueto here are some of the things people had to say:

“The arm is there. The stuff is there. It’s a matter of time,” said former Reds pitcher Mario Soto, an organizational instructor who works with young pitchers in the Dominican Republic.

“I saw him pitch in the Dominican — he was pretty good,” said new closer Francisco Cordero, who also is from the Dominican Republic. “I believe he’s good, because every time we try to trade for someone, they always ask for Cueto. Something’s going on.”

Cueto senses how close he is to getting to the Majors.

“I feel already like I can be in the big leagues now,” Cueto said through interpreter and teammate Jerry Gil. “I feel 100 percent with everything — my pitches, anything. I think I have a good chance.”

Listed at 5-foot-10 and 183 pounds, Cueto isn’t a prototypical, big-statured pitcher like Bailey or Harang. What he lacks in size, though, he makes up with his pitches.

“There’s a lot of guys — Pedro Martinez and Greg Maddux — that aren’t that big,” Sweet said. “There are a lot of guys that have had success that are average size. To me, Cueto is so free and easy. That’s not something to be concerned about.” 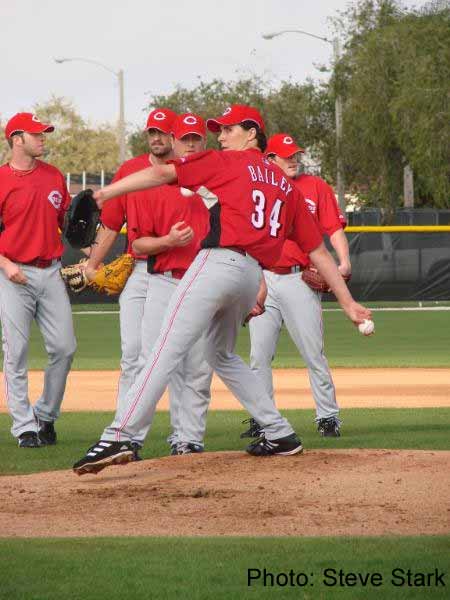 Homer Bailey throws from the mound during spring training