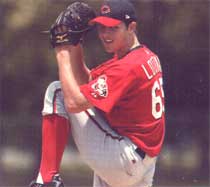 Reason to watch – As a supplemental first round draft pick, the potential is obviously there, but Lotzkar’s performance last year surpassed his predraft hype. He showed a fastball as high as 95 MPH and showed control, which had been something the predraft reports said he needed work with. He could be one of the youngest players in the league next year, but I don’t think that will stop him from performing well.

Reason to watch – Who doesn’t like Home Runs? Well, pitchers on opposing teams, but we don’t care about those guys anyways. Last year Waring set the Billings record for HR’s in a season after finishing second in the NCAA in HR earlier in the year. He could challenge Samone Peter’s Dayton HR record (28 in 2001) if he sticks around all season, but I doubt he is in Dayton long enough.

Reason to watch – Last years 1st pick has all the tools you want in a catcher. He stumbled at the plate last season with two injured thumbs, but he has been impressing so far in the spring. He isn’t a lock to start in Dayton, but I get a feeling that he will see some time there even with several other catchers in contention for playing time. His talent behind the plate is noticeable right away and at the plate he has a quick bat that will impress.

Reason to watch – After struggling his first season Reed burst onto the scene last year in the GCL before getting a promotion to Billings. He is a very toolsy player who made some strides in his game last year.  His speed is well above average and at the plate he has good bat speed although his swing is still a work in progress.

Tomorrow I will take a look at the Sarasota Reds.