Today is the day I will start the Top 40 prospect list for 2008. I will do 10 prospects per day and hopefully Friday we can have a topic to discuss the overall rankings. You can check out the previous years rankings by clicking here or going to the link above the banner at the top of the page. Let me start off by saying this was the most difficult list I have ever had to make. Some of the guys I left off the list were pretty good prospects. Anyways, lets get onto the list. 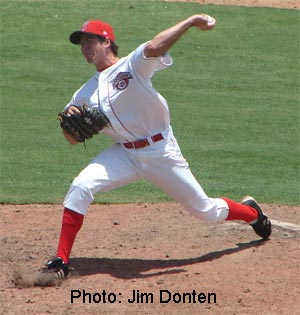 Valiquette (right, photo by Jim Donten) seems like he has been around forever, but he was drafted as a 17 year old out of Canada which makes it feel like he is older than he is. He features a fastball in the 92-95 MPH range, which coming from a lefty can be dominating. He may start in Sarasota or in Carolina next year.

Lecure doesn’t have anything overpowering, but he knows how to use his 88-91 MPH fastball, solid change up and slider to get hitters out. He posted a FIP under 4.00 in AA this year and I would expect him to start 2009 in Louisville.

Buck was a big time draft prospect heading into his junior year of college before losing velocity on his fastball. He was drafted by the Diamondbacks and tried rehabbing before heading in for TJ surgery. This year was his first season back and the velocity wasn’t where it was, but his changeup was still very good and his sinker was leading to Brandon Webb type groundball rates. If he were fully healthy he would rank much higher. He could start in Sarasota or in Carolina next year.

Jordan Smith’s best pitch is his 90-95 MPH fastball that has plenty of sink on it which leads to him inducing 55% of balls in play against him on the ground. At face value his promotion to AA wasn’t successful as he posted a 5.40 ERA, but looking deeper we can see that he had a 4.32 FIP, strong groundball rates as well as solid K and BB rates. Look for him to start in AA Carolina next year.

Cumberland has always been one of those ‘toolsy’ types of players who hadn’t really put together a solid season in the minors. He made big strides in AA this year as he posted a 12.5% walk rate (much higher than any rate he has ever had previously) and that helped lead to an .826 OPS in Chattanooga. His numbers fell off a bit when he was promoted to AAA, but they look a little unlucky although he will need to fix his K rate from AAA. Look for him to head back to Louisville next year. 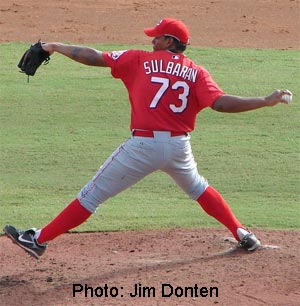 Sulbaran (right, photo by Jim Donten) did not play this year as he signed on the final day that he was able to sign. He did go to China and play on the Netherlands National Baseball team. The Reds paid the RHP $500,000 to sign as a 31st round pick. He throws 89-92 MPH with good movement on it. He is currently in Fall Instructional League and I would expect him to begin in either the GCL or Billings next year as an introduction to pro ball to help limit his innings some.

Watson has some of the best stuff in the system, but he has a real tough time throwing it for strikes. He walked over 16% of the batters he saw this year. He struck out a crazy 29% of batters, but if he doesn’t hone in some control he isn’t going to have any success regardless of how good his stuff is.

Sean Henry is coming off a season where he was 22 for most of the year in AA and posted an .814 OPS. The main concern is that he is an undersized guy at 5?10 and 180 pounds. He is a very solid guy and it wouldn’t surprise me if he turns into a Ryan Freel type of player without as many steals but with a little more power. It honestly wouldn’t surprise me if he started out next season in AA again because of depth issues.

Waring has some really good power in his bat as seen with his 20 HR, but the strikeout rate is downright scary at 31%. Given his age and the level, he is going to need to make some big improvements in the strikeout department. Look for him in Sarasota next year.

Ramon Geronimo has done nothing but dominate the minor leagues since he has come over from the Dominican. He has a 1.03 WHIP and 2.19 ERA in his minor league career (in the US). His stuff isn’t overpowering exactly as he tops out around 91 MPH, but he uses an above average change up to fool hitters. He could start in AA or AAA next year.