The final 10. You guys probably figured out who they were by elimination, but the order is what makes it fun. Yesterday we went from 11 to 20, Tuesday was players 21 through 30 and Monday was 31 through 40. 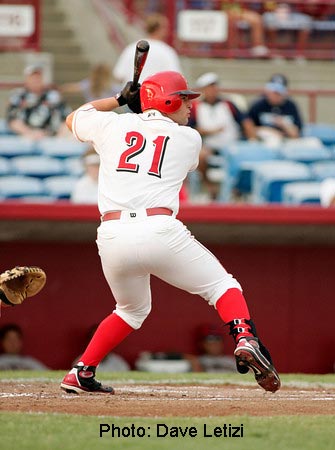 Yonder Alonso comes in at #1

Alonso (right) was the Reds 1st round pick in 2008 and just brings an all around offensive game to the table. He can hit for average, he has some pop in his bat and he has very good plate discipline. He reminds some of the Padres Adrian Gonzalez. Already on the 40 man roster, expect him to be on the fast track. Where he starts next year is up in the air, but expect it to be either Sarasota or Carolina.

Soto was known for his big time power in high school as he broke Juan Gonzalez national HR record for high schoolers in Puerto Rico. His ability to hit for such a high average along with his power is what really sets him apart from most. He hit .340 this year between Billings and Dayton while slugging a combined .558. His one issue has been drawing walks to this point, although he hasn’t shown a high strikeout rate, so his plate discipline isn’t much of a concern just yet. Look for him in Sarasota next year.

Stubbs value starts with his plus plus speed and his game changing defense in center. His bat however has made some strides this year as well. He lowered his strikeout rate again this year and went through 3 levels all the way up to AAA while showing a stronger performance than he did in 2007. There are still some questions about his bat, but they are going from ‘will he ever hit’ to ‘how much will he hit’. I think his bat will allow him to be an above average major leaguer when coupled with his defense. I would look for him to be in Louisville to begin next season.

Frazier’s bat is legit. He can do it all, hit for power, hit for average and draw his fair share of walks. The main question with him is where he will play on the field. The Reds have had him at SS, 3B and 1B this year. Still, no matter where he ends up, his bat will play there just fine. Look for him to start in Carolina next year.

Valaika (right) lit the Florida State League on fire to start the year and earned a promotion after a month to AA. He began slow but really caught fire after a month there (.318/.364/.460 from June on). He hits the ball to all fields and with some power (only 6 of 19 HR were pulled) and will hit for a solid average. Valaika improved his range this year, although there are still a lot of questions about whether he can stick at SS in the majors defensively. Expect him in Louisville next year.

Coming out of high school Mesoraco was a late riser that vaulted into the first round. He struggled to start, but rebounded this year in the pitching friendly Midwest League. He had some defensive concerns early on in the year, but as the season progressed they improved. He has all the tools to play an above average catcher, he just needs to learn to use them more in game. His bat is still a bit raw (although he did win the Dernell Stenson award in Fall Instructs), but the bat speed is there and his plate approach isn’t bad. Given how catchers often develop, he seems to be on schedule. Tough to guess where he goes, as it may benefit him to be in Dayton again although I suspect the Reds push him to Sarasota.

Had it not been for a late season elbow fracture, Lotzkar would have ranked higher than he is at right now. The injury brings about some concern still, but until told otherwise, its just a bump in the road. Lotzkar has a 90-95 MPH fastball, a good change up and a good curveball. He struck out a crazy 29.6% of the batters he faced this year while being extremely young for the league he was in. His control needs a bit of work still, but he has #1 potential. Depending on how his arm is next year he could be in Dayton or Sarasota next year.

Stewart was the Reds 3rd round pick this year and has some absolutely electric stuff. He has a mid 90’s fastball with movement that tops out around 97 MPH. He couples that with an above average slider as well. He struck out over 26% of the batters he faced last year in his limited 32 innings. He looks to be fast tracked and I expect him to be in Carolina next season.

Dorn has done nothing but hit the cover off the ball since being drafted. He has very good power (.235 career isolated power) and  real strong plate discipline (.090 career isolated discipline). His defense is nothing special, but its not terrible either. His bat is his calling card though as he has a minor league career OPS of .915 in 3 seasons through AA. Look for him in Louisville next year.

Francisco has some of the best power potential in the minor leagues as the ball just explodes off of his bat. His power is legit and he can hit pitches all over the zone. That strength also leads to his weakness though, as his ability to draw walks is among the worst in all of the minor leagues. His potential is through the roof, but he must improve his plate discipline before he can be a fully productive player. Defensively he possess a plus arm, although I feel he is going to outgrow the 3B position and maybe need to move off the hot corner. Look for him in Carolina next year.