As I’m sure you’ve seen by now, the Cincinnati Reds acquired right-handed pitcher Sonny Gray from the New York Yankees on Monday afternoon. The official trade brought Sonny Gray and left-handed pitching prospect Reiver Sanmartin to Cincinnati. The Reds send Shed Long, who was immediately traded to Seattle, and a competitive balance draft pick to the Yankees. As a condition for the trade, Gray also agreed to a contract extension with the Reds for three seasons, with a fourth year as an option year.

The prospects and the draft pick in the trade can kind of be given some value based on the Fangraphs prospect evaluation system. Shed Long carries a surplus value of $28M as a 50-grade prospect. Reiver Sanmartin didn’t make the Fangraphs midseason Yankees list, but was in the “others” section. Kiley McDaniels said he thinks he could be a future match up reliever. While he’s not of no value, the surplus value is less than $1M. The draft pick is valued somewhere between $5-10M depending on how it’s used. For the following exercise we will call it $7.5M.

From a value standpoint, the Cincinnati Reds sent out about $35.5M in surplus value to acquire Sonny Gray and Reiver Sanmartin. As noted, the surplus value on a prospect like Sanmartin is fairly negligible. Again, that’s not to say there’s not value there – there could be in the future. But based on his current grade, the average of players with that grade – it’s been very small.

That brings us back to Sonny Gray, and his contract. The surplus value he would provide would be what value he provides beyond what he’s being paid. From 2019-2022 he is owed $38M. To be worth that contract, Gray needs to be worth, roughly 4 WAR based on the current prices being paid per WAR. While I’ve got some issues with how the different versions of WAR are calculated for pitchers, let’s just average out the baseball-reference and fangraphs versions here. Last season Sonny Gray was worth 1.2 WAR (averaged). When he was at his best, in 2015, he was worth 4.5 WAR (averaged).

In order for the Reds to “break even” on this trade, using the surplus value tools at hand, Sonny Gray would need to be worth somewhere in the 8-9 WAR range from 2019-2022. That’s not a huge ask. But it’s not a guarantee, either. He made his debut in 2013, but only pitched 64.0 innings in the Majors – he joined the team mid-season. He’s been in the Major Leagues ever since. In those six seasons he’s averaged 2.2 WAR (averaged) per season.

We’ve seen Sonny Gray at his best be significantly better than 2.2 WAR in a single season. We’ve seen it  a few times throughout his career. Making the move to the National League may help as he’ll get a few easier chances with pitchers and pinch hitters instead of designated hitters. But he’s going to have to remain healthy and on the mound. And that’s where he’s had some struggles lately. The last time he threw more than 162.1 innings was in 2015. Over the last three seasons he’s managed just 409.2 innings pitched. While the game is certainly changing and you don’t see as many 200+ inning starters anymore, the Reds are likely hoping for at least 170+ out of Sonny Gray.

The New York Yankees have shifted their pitching philosophy to “less fastball, more offspeed”. In 2018 Sonny Gray saw his fastball usage drop off quite a bit. Those dropped fastballs became curveballs. This was a season, that from a pitch usage standpoint, was not like the rest of his career. Also not like the rest of his career, his walk rate in 2018 was well below-average. Perhaps that could be why the control was an issue.

But, maybe it wasn’t. On the road, Sonny Gray walked just 7% of the hitters he faced. And his strikeout rate was 26.4%. But at home, in Yankee Stadium, his walk rate was 12%. His strikeout rate was an abysmal 15.7%. He was, in nearly every way, a very different pitcher at home versus the road. Was it the ballpark getting in his head? It’s extremely hitter friendly and mistakes often wind up in the seats. Was it simply pitching in New York and the weird pressure got to him? Or was it just one of those weird splits that show up by pure randomness? I don’t have that answer, but the Reds have to be hoping that it wasn’t the ballpark because the reason that Yankee Stadium would get in a pitchers head is exactly the same reason Great American Ballpark would. Mistakes land ten rows deep.

With all of that said, even before discussing the option year, the Reds got Sonny Gray locked up for the next four seasons at a price that basically is asking him to be a league average pitcher in order to come out even, or slightly ahead on this deal. There’s upside on the deal, though. And plenty of it. Gray’s got a rare combination of high ground ball rates and the ability to miss bats. Guys that are above-average at both are rare, and they tend to also be pretty good. Staying on the mound will be key, as it is with all players. You can’t produce if you’re not on the field. But if he’s taking the mound every five days for the majority of his contract, the odds seem good that this deal is going to look fine for the Reds.

That’s enough about Sonny Gray for now. Let’s talk a bit about Reiver Sanmartin, the left-handed pitching prospect that came over in the trade from the Yankees. The numbers are outstanding. Only in his first season as a professional was his ERA above 3.00, and he only threw 10.1 innings back in that 2015 season. Since then he’s posted ERA’s of 2.35, 2.45, and 2.81. He’s mostly been used as a starter, and he has also generally been considered old for the levels at which he has played. Here’s a quick statistical look at his career in the minors thus far: 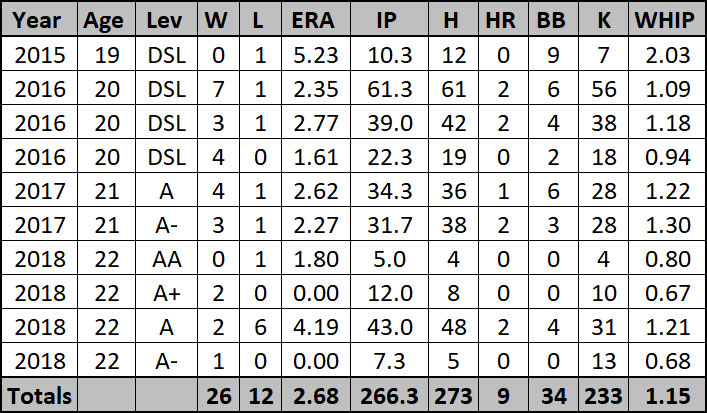 Numbers are one thing, but scouting is another. Players can put up very good numbers in the minors – particularly the lower levels – without projecting to be able to perform in the Major Leagues. So where does Reiver Sanmartin fall on this scale? Well, the numbers are definitely better than the scouting report. It would be tough not to be given the numbers.

His fastball works in the 89-92 MPH range and has good sinking action to it. That’s helped him generate a good rate of ground balls in his Minor League career. He also throws both a slider and a change up. They are both pitches that could be average offerings in the future. Here’s what Fangraphs Eric Longenhagen had to say about him on twitter after the trade:

Reiver Sanmartin is like a college pitch-ability arm. He’s 22, so this is probably all the velo there will be, but it sinks, he’s a ++ athlete with + breaking ball command, his sinker and change have complimentary movement, the arm slot is weird. I like him.

Kiley McDaniel, the other Fangraphs prospect guru (and former scout as well as Atlanta Braves front office employee), said that he thinks Reiver Sanmartin could be a future match up lefty. Let’s take a quick look at how his career has broken down when it comes to facing lefties and righties.

Reiver Sanmartin hasn’t spent much time beyond A-ball. He reached Double-A in 2018, but it was just for one start in Trenton. He was only in Advanced-A ball for two games in 2018, too. It’s a long way from A-ball to the Major Leagues. But he’s absolutely dominated left-handed hitters thus far in his career.