Cincinnati Reds top prospect Hunter Greene is in Cincinnati. The right-handed pitching prospect who is back to hitting 102 MPH after having Tommy John surgery in April of 2019, shared a photo in his instagram stories earlier today from the outside of Great American Ballpark. It could have been an old picture, of course. But just after 9 PM he also posted this on his instagram account, though it has since been deleted: 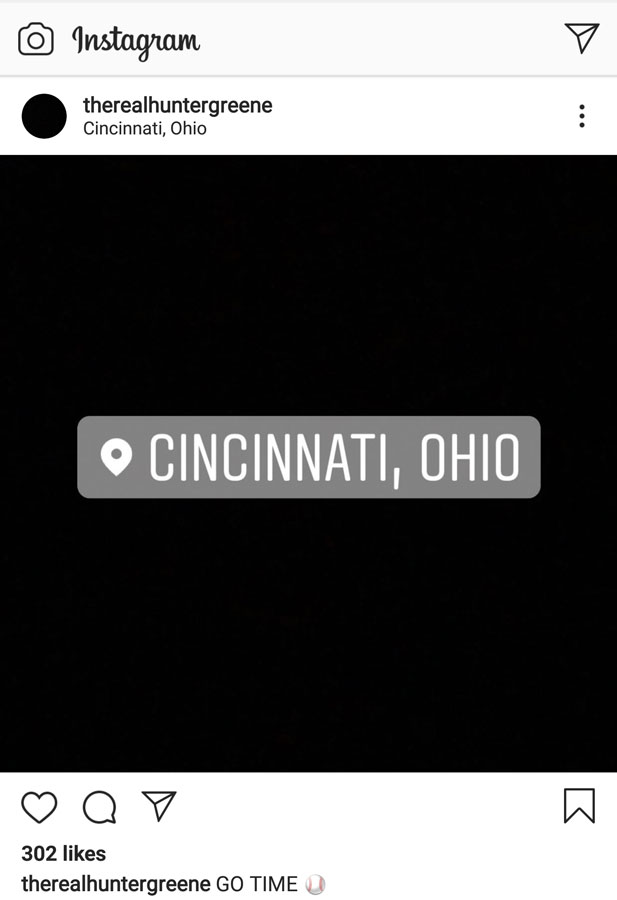 “Go Time”. While Cincinnati has plenty of things worth checking out, it doesn’t seem likely that Hunter Greene traveled to Cincinnati to take a tour of the Zoo to check out Fiona, or to go on the latest ride at Kings Island. No, it’s almost a certainty that he’s in Cincinnati to play some baseball.

Each team gets a 60-man player pool to work with this year. The Reds current player pool is sitting at 57 players after the team designated Scott Schebler for assignment this afternoon. That leaves them with three spots that they can fill with players if they choose.

When the roster pool was initially announced it seemed a bit confusing that Hunter Greene wasn’t on it given that we had seen him throwing 102 MPH in June, giving us every single reason to believe that he was 100% recovered and healthy after his Tommy John surgery. But the young right-hander wasn’t listed. When asked about players who were missing, Reds General Manager Nick Krall noted, “Just because we didn’t put a guy on doesn’t mean you can’t add him later” – and we have seen many teams do that since the initial rosters came out. Cincinnati, thus far, has only added one player – Derek Dietrich, who couldn’t join the team until he had recovered from COVID-19.

For Hunter Greene and the Reds, it’s easy to see where there’s a strong possibility that he could indeed help the team out at some point this year. While it may not be a good plan to think he’s going to come out and start in the big leagues this season given that he hasn’t been building up his innings – and the plan this year was to ease him back into the role as a starter, slowly building up his innings this season as he progressed – bringing him out of the bullpen in shorter stints while throwing the full arsenal of pitches could be a lethal weapon for the team to go to at some point. In a season where the organization may feel it’s truly a “go for it” situation, 102 MPH with a plus slider – even from a 20-year-old who hasn’t pitched above Low-A ball is something that absolutely needs to be considered.

If Greene is indeed being added to the player pool roster, don’t expect him at Great American Ballpark on opening day. That seems like a bit of a stretch given that he hasn’t been with the team for all of July at this point. He likely heads to the Prasco Park group where he’ll get to work with the developmental staff and be there in order be prepared if and when the call comes that the Reds need reinforcements.