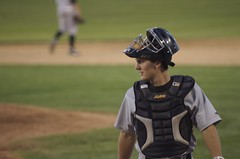 Reason to watch – Tatum isn’t the best catcher in the system, but he is a solid prospect at a higher level. He hit very well in the FSL last year before his promotion to Chattanooga where he struggled a bit with his hitting (although he did improve his walk rate dramatically).  If Tatum can have a solid season he could be in the big league plans soon.

Reason to watch – Dorn lit Chattanooga on fire last year, but it was in just 90 at bats in the last month of the season. He is likely to start in Chattanooga against. With the contract status of our current corner outfielders, if Dorn can continue his production up the ladder he could really help solve a problem if the Reds don’t sign anyone. He struggles against lefties, so hopefully we can see an improvement there, but he kills righties so maybe it won’t matter much.

Reason to watch – After pitching very well in Sarasota last year Thompson came into spring training and got into a few games in spring training with the Reds this year. He struck out 4 batters, walked none and allowed no hits in 2.1 innings. The jump to AA is supposed to be one of the biggest in baseball. Thompson could become a legit option with a strong season for the Lookouts.

Reason to watch – Lutz is one of the Reds many solid bullpen prospects throughout the system. He is an extreme ground ball pitcher who also gets a solid number of strikeouts. He began last year in AA, but it was only as a fill in. This year he will start there and for good reason. Like Thompson, if he can make the jump to AA and perform well it would just help bolster the Reds options heading into 2009 in free agency for the bullpen which very soon could feature a whole lot of younger guys produced through the system.

Yesterday I covered the Sarasota Reds and Monday I touched on the Dayton Dragons. Tomorrow I will preview the Louisville Bats and on Friday will cover some of the guys who weren’t listed with a team for different reasons.