Jon Moscot hasn’t pitched since last June when he took the mound on the 30th for Triple-A Louisville. The right hander would wind up undergoing Tommy John surgery one year ago today. Things have been going well for Moscot, who told me that his arm is feeling really good. He’s currently throwing bullpen sessions in Goodyear as he works his way back. Assuming things continue to go well he could face hitters next month. The expectation is that he’ll pitch in “games” during instructional league, with a chance he could have a rehab assignment towards the very end of the minor league season.

When you think about players who top the leaderboard in exit velocity you tend to think of players who hit for a lot of power. Gabriel Guerrero has hit one home run this season for the Double-A Pensacola Blue Wahoos this season. He’s slugging .348 on the year, not a number you would see and think “this guy hits the baseball hard”.

However, this is the same guy who went out and won the Southern League home run derby. He’s got some raw power in his bat, even if it’s not showing up right now in games. It seems like he’s trading power for contact. While tracking home run distances I happened to come across a line drive that was hit, and turned into an out, off of the bat of Gabriel Guerrero. The announcer noted that it was off of the bat at 112 MPH according to the Trackman system. The Cincinnati Reds big league club has one baseball that’s been hit that hard this season. Patrick Kivlehan hit one at 111.6 MPH off of Jonathan Broxton on April 8th. That’s it.

Phillip Ervin and his rare opposite field homer

Last night in Louisville Phillip Ervin had a big night at the plate, going 3-4 with a double and a home run. Over the course of his minor league career, Ervin has hit his fair share of home runs. He’s hit 49 in his career, but until last night only one had ever been to the right of dead center field. It went to right-center field.

Tuesday night Phillip Ervin took a fastball that was up in the zone and crushed it to right field for a home run. It wasn’t right-center, but it went out to the part of right field where the right fielder ran back and to his left thinking he had a shot at it for a second. Here’s a look at the home run spray chart for Ervin in his minor league career. 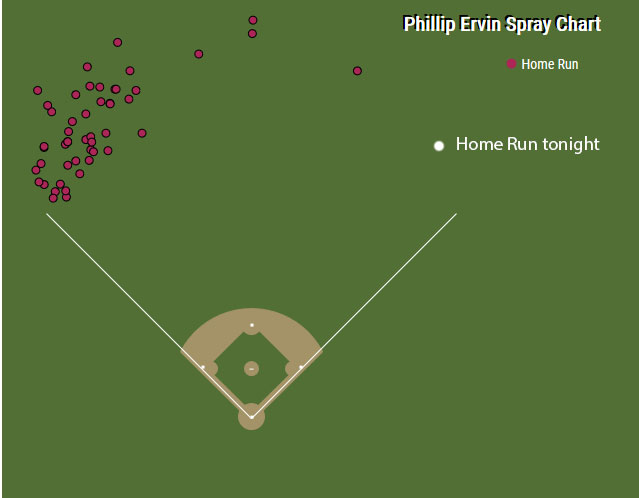